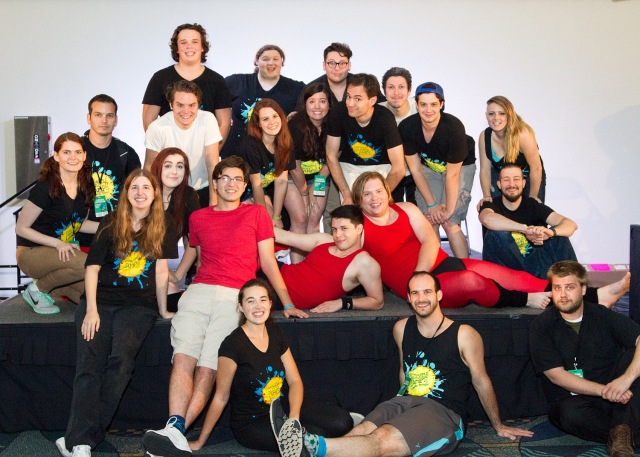 How did Pineapple Shaped Lamps get started?

We started back in 2010 as a Rocky Horror Picture Show shadowcast. We would screen the movie and then act it out onstage, and this was something we would do once a month in downtown Wilmington. After a while, the owner of the bar we performed in asked us if we’d be interested in doing a weekly comedy show. We naturally said yes, and in the fall of 2010, we started “Thursday Night Live,” a weekly sketch comedy show inspired by Saturday Night Live and other popular sketch shows.

What do you want visitors and locals to know about Pineapple Shaped Lamps that they may not already know?
We’re not an improv troupe! 😆 For a long time, people have just assumed that, because we’re a comedy troupe, we must do improv. And while improv shows have been a part of our repertoire whenever we go on tour, our “bread-n-butter” has always been sketch comedy. Everything we do onstage has been painstakingly written and rehearsed before we allow it to be shown to audiences.

What’s the craziest thing to happen at a Pineapple Shaped Lamps show?

Marriage proposals! You’d be surprised how many people have asked us to let them propose to their significant other before or during a show. In the last four years, we’ve had two proposals during one of our monthly sketch shows (one by our own artistic director, Wesley Brown!), as well as a surprise proposal that happened during the virgin initiation of one of our Florida Supercon performances of Rocky Horror!

How has Pineapple Shaped Lamps grown over the years?
We’ve gone from being a handful of friends getting together to write a silly sketch show every week, to a massive group of 30-40 people who are always involved in a wide range of projects, from sketch comedy shows to full-length stage productions to TV commercials for local businesses! Just last month, we had some of our founding members who had relocated to Los Angeles start up a West Coast branch of PSL, and they’ve already started performing PSL sketches at various comedy clubs in L.A.!

What’s next for Pineapple Shaped Lamps?

We already have begun planning a new musical that we are hoping to produce in our hometown of Wilmington sometime in October, so keep an eye out for that! We are also very excited about Supercon’s plans to start a new convention next year in Raleigh, NC, our neck of the woods! We’re very much looking forward to being involved in its inaugural year!

What social media does Pineapple Shaped Lamps use?

A bunch of f**king weirdos.