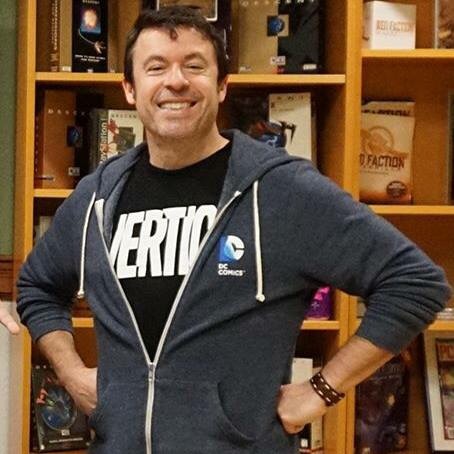 When did you know you wanted to be a comic book writer?

I always loved telling stories and reading when I was a kid. At fifteen I discovered comics – a perfect blend of story and art where anything could happen because (as we often joke) comics have an “unlimited special effects budget.” I started writing and (badly) drawing my own stories, and by the time I got to college I knew writing comics was my dream job. The trick was finding a way into the business. It wasn’t until after college that I moved to New York and got in as an intern at a small publisher.

What have you noticed about the comic book industry over the years?

I started back in 1992 and I’ve seen sales peak and plummet repeatedly, with the “death of comics” being predicted every ten years or so. But we’re still making funnybooks, and over the years the general public acceptance of comics has continually ticked upward. As a teenager I didn’t want anyone knowing I was a comics geek. Now it’s a badge of honor. We’re still pretty centered on superhero stories, but there are more and more comics like The Walking Dead that find success in other genres. Also, digital comics may end up saving the industry from problems faced by other print media. If you haven’t read a comic on your phone or tablet then you really need to give it a try! I’m pretty old-school about this stuff, but I love reading comics panel-by-panel on my computer. Never thought ‘d say that, but it’s true.

What do you want visitors and locals to know about the comic book industry that they may not already know?

It’s not all capes and tights. There are great Horror, Romance, Science Fiction, Western and Fantasy comics out there. And some of the best comics, like Love & Rockets by the Hernandez Bros. and Fun Home by Alison Bechdel are the hardest to pigeonhole into a genre. I can only hope that the recent growth in comics-based movies and TV will result in America embracing this art form that we pretty much invented. So if superheroes aren’t your cup of tea, there’s plenty of other great stories waiting you in comics. And a lot of very friendly comic stores are eager to show you around. They’re not all like that Comic Book Guy on The Simpsons. (Okay, some are, but not all.)

What comic book would you like to work on that you haven’t yet?

Strangely enough, it’s Aquaman. He used to have a cartoon when I was a kid that I adored. I have gotten to write the character a few times, but it’s always been a different version of Aquaman like the brooding ‘90s Aquaman with a harpoon for a hand, or even the Evil Tyrant Aquaman. I just want to do the classic, happy version of the character. The Guy Who Talks To Fish. Go figure.

I’m on Facebook constantly, and occasionally on Twitter. I don’t Instagram or SnapChat or whatever. Maybe I’m just not keeping up like I should. But I do try to stay current because all of these media and changes in how we interact have to be reflected in my stories, especially if I’m writing a technology whiz like Batman or a savvy young hipster character. Gotta admit, though: my favorite social medium is still beer.

Describe the comic book industry in 5 words or less