Learn About The Laughing Stock!

1) How did The Laughing Stock get started?

Much like the Universe itself, Laughing Stock was born out of the black hole that was Tallahassee humor in 1989.

We did a parody called “Overbuilding” based on the musical “Oklahoma” for the retirement party for a Leon County commissioner and public officials found they so liked being publicly humiliated that we have been doing it ever since.
2) What do you want visitors and locals to know about The Laughing Stock that they may not already know?

NSA may know more about Laughing Stock, but they, like us, are prohibited by strict morality laws from revealing any of it.

3) How exactly does a Laughing Stock show get made?

You have heard about watching sausage and laws being made? The making of a Laughing Stock show is far, far more alarming and not for those with a weak stomach.
4) How difficult is it to determine what does or doesn’t make it into the final version of the show?
What makes it into the show is determined by who screwed up the most that year, how therapeutic making fun of the subject of the song is for the authors, which actors come to rehearsal remotely sober and an uncanny sense of what will still be amusing 6 weeks after it is written, when we actually do the show.
5.) Is anything off limits?

Sorry, what does “off limits” mean?

6)What is it like having the subjects of the show in the audience and seeing their reactions?

That is pretty awesome, but even better is seeing their reactions when they are not mentioned at all!

7) What social media do you use?

8) Describe The Laughing Stock in 5 words or less

Why five? Can’t do that. 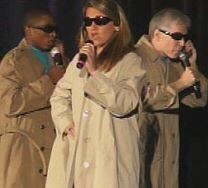